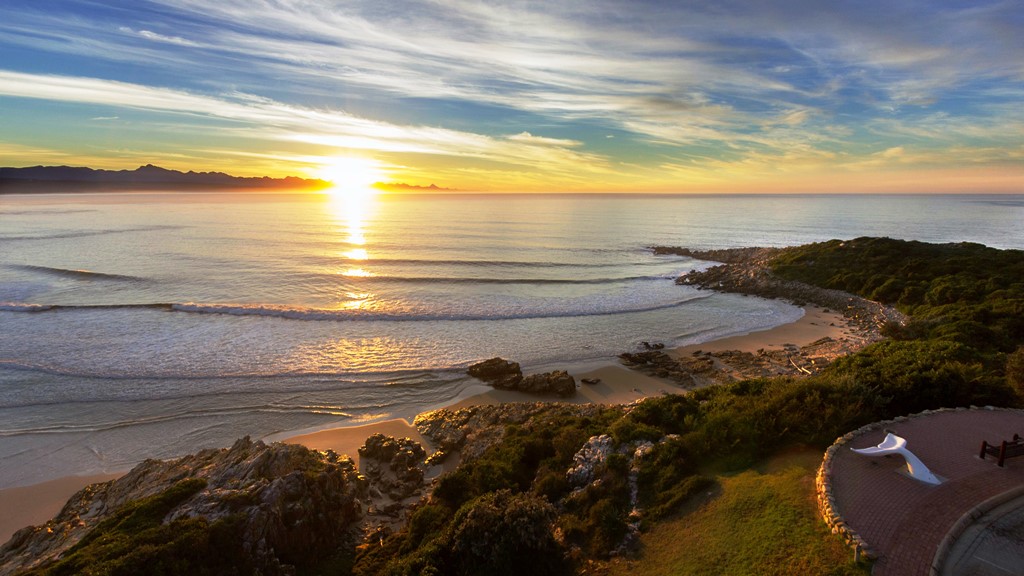 Along the famous Garden Route, Plettenberg Bay is South Africa’s favourite outdoor playground. It’s lazy days on sunny world-class beaches and for others it’s boutique shopping, wine tasting, dining under the stars, incredible wildlife experiences and outdoor adventure. Whatever blows back your hair, it’s here in Plett and it’s all for you!

An intriguing mix of Middle Stone Age man, indigenous Khoi people, ostrich Feather Barons, woodcutters, farmers, gold-diggers, merchants, sailors, craftsmen, ordinary folk, even intrepid explorers such as Portugal’s Bartholomew Diaz who landed at Mossel Bay in 1488, as well as a modern day diverse mix of tycoons and artists have left their mark on the region.

Plett’s Nelsons Bay and Matjes River Caves were inhabited by Middle Stone Age man for over 100 000 years with the Khoisans leaving a legacy of tools and ornaments. Deposits of their tools, ornaments and food debris can be viewed in these caves which are still being excavated. One can also observe the geological changes over the past millions of years which affected prehistoric life.

Long before Van Riebeeck landed at the Cape, Portuguese explorers of the 15th and 16th centuries called in and charted the bay, the first being Bartholomew Dias in 1487. Ninety years later Manuel da Perestrello aptly called it Bahia Formosa or the Bay Beautiful. The first white inhabitants were the 100 men stranded here for nine months when the San Gonzales sank in 1630. In 1763 the first white settlers in the bay were stock farmers, hunters and frontiersmen from the Western Cape.

Historical figures include the leader of the Griquas, Andrew Abraham Stockenström le Fleur, who by his people, was looked upon as a new Messiah. The name of Le Fleur is intimately associated with the history of the Griqua people in this area and his grave can be seen in the village of Kranshoek on the Robberg/Airport Road.

The village of Harkerville was named for Robert Charles Harker, who, as a Government resident, controlled the affairs of Plett for 21 years. The family graves are one of the highlights on the Plett town day walk.

Plett itself is an intriguing mix of cultures. A woodcutter’s post was established in 1787 and Johann Jacob Jerling, an early inhabitant, was commissioned by the Dutch East India Co. to build a storehouse for house timber which was to be exported.

The Swede, Carl Peter Thunberg, was the first to document valuable observations on the bay and Robberg and the Governor of the Cape, Baron Joachim van Plettenberg, renamed the town Plettenberg Bay in 1779. In 1910 a Captain Sinclair set up the whaling station on Beacon Island to harvest the placid Southern Right whales but this ceased operation in 1916. The first hotel was erected by Hugh Owen Grant in 1940 and replaced in 1972 by the current well known landmark on Beacon Island.

Today this modern town is comparable with Monaco, an exquisite emerald on shores of the azure-blue Indian Ocean; it basks between enchanting old villages. With over 300 days of sunshine a year and temperate climate, it celebrates with passion culture, spectacular nature offers, delicious cuisine, restoration of mind and body, high-adrenaline activities and land and water sports.