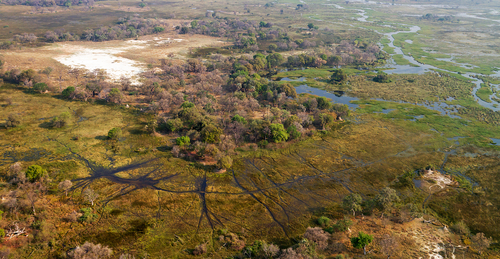 “All rivers run into the sea…” that is the natural course. However, the Okavango River is referred to as the river that never finds the sea.

Strange movements in the earth’s crust dating back to about 40,000 years resulted in the blockade of the river, causing it to empty itself into a swamp in the Kalahari Desert which created a unique pulsing wetland, or an alluvial fan called the Okavango Delta.

Tagged “Africa‘s Last Eden,” the Okavango Delta measures 20,236km² and it has been Identified as one of Africa’s last remaining great wildlife habitat, offering refuge to a large concentration of wildlife. From June to August as the annual flood peaks during Botswana dry winter period, the delta swells to thrice its permanent size. This creates one of the continent’s greatest concentration of wildlife as animals are attracted from several kilometers around.

Made up of permanent swamps, islands and seasonally flooded grassland, Okavango Delta apart from its teeming wildlife is also an Important Birdlife Area. Recently, a review of the area recorded a total of 122 species of mammals, 444 bird species, 71 fish species, 64 species of reptiles, and about 1,300 species of flowering plants.

Following a successful rhino reintroduction program, the Okavango at presents boasts of about 35 white rhinos and 4 black rhinos. Other animals that can be spotted include: elephant cheetah, giraffe, buffalo, lion, leopard, impala, wildebeest, kudu, duiker, hippo, serval, waterbuck, roan, and many more.

In 2014, Okavango Delta was inscribed under the UNESCO criteria: vii (natural beauty), ix (evolutionary processes, and x (biodiversity) as a World Heritage Site, becoming the 1,000th site to be listed.