Night Out in Kololi, Gambia 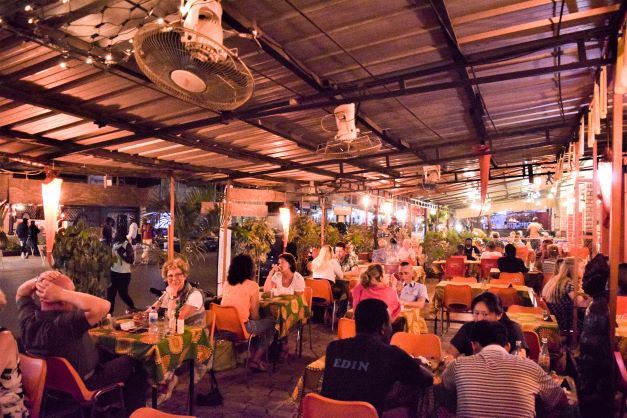 In the long run, everyone who comes to the ‘Smiling Coast’ ends up in Kololi, particularly on the famous strip – the Senegambia Strip. In truth, Kololi is the heart of tourism in The Gambia, the smallest country on mainland Africa.

Of course, the country is much more than Kololi. The Gambia certainly has quite a lot to offer the tourist when it comes to attractions and activities. The River Gambia plays a very important part in the tourism business in the country and boat cruises upriver into the heart of the country are some of the popular choices.

But the thing about Kololi which is really a suburb of Serrekeunda, the largest city in The Gambia is the fact that most of the country’s best hotels and accommodations, coupled with restaurants, nightclubs, and bars can be found there – and that uniqueness makes Kololi the number one choice for the best night out in the whole of the country.

In the day time, Kololi is still a lively spot and it offers some attractions like the Bijilo Forest aka the Monkey Park which is towards the end of the famous Senegambia Strip. The Monkey Park is good spot to enjoy a hike and see some primates and birds.

The beach is another thing that draws people to Kololi and it is a bustling place to be at. Different kinds of interesting characters can be found at the beach, such as peddlers trying to sell you souvenirs. If you don’t know the worth, they’ll rip you off. But you can make your purchases instead at the craft market in town.

A couple of shacks on the beach have reggae music playing and you’ll see some rastas doing their thing. Some may try to roll you a joint, if you’re given to that kind of fun. You’ll also see a couple of young men keeping fit, trying to impress their potential targets, the white middle-age female tourist – I suppose you know the gist by now about sex tourism in The Gambia.

In any case, you have nothing to fear on the beach from anyone, because the bumster issue has been effectively resolved by the government with the creation of tourist police. However, you should look out for the flag to see if it’s okay to take a swim in the ocean.

But for those who know the real fun in Kololi starts after the sun retires from the sky and the night is lit by electric stars. No fear of sunburn or heat stroke as tourists walk the Strip in search of entertainment, fun, and good food. There are bars, casinos and different kinds of restaurants, serving continental dishes to titivate the senses.

They include oriental, Indian, Dutch, Italian, Danish, and of course African and many of them apart from the meal, offers you a serene and soothing ambience to listen to and enjoy good music from a live band.

Hey! But that’s not where all the fun ends, particularly for young at heart and those who enjoy clubbing, Kololi is the destination to be if you’re in The Gambia. The clubs starts to fill late into 23:00 hours and it don’t stop until the early morn! Best believe it, everything you’re looking for at the club is there in good quantity: music, drinks, and dancing bodies…

This article was initially published in S.E.E. AFRICA magazine in 2016 and it is based on the writer’s experience from 2015. Kololi and The Gambia has undergone a whole lot of transformation since.