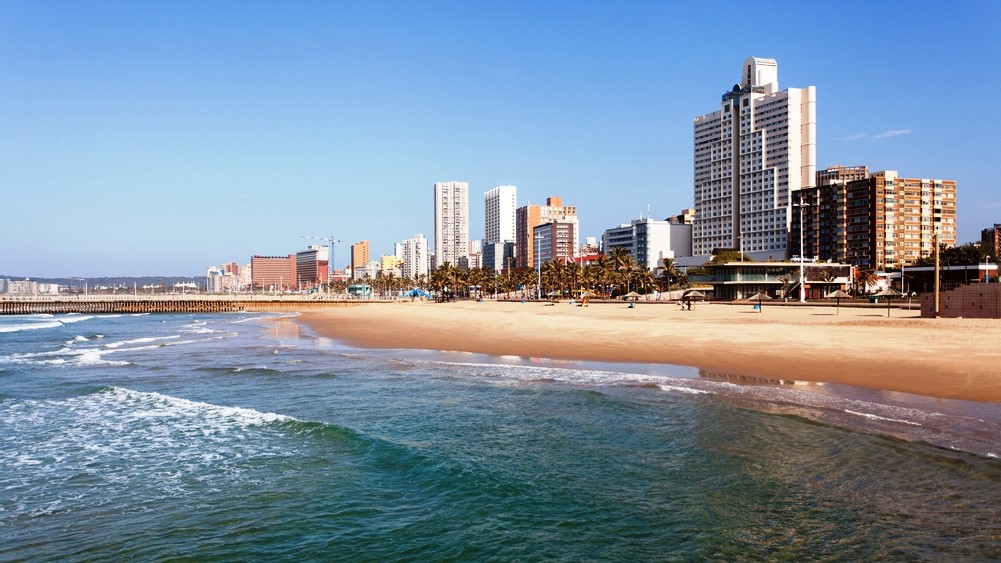 Otherwise known as eThekwini (Zulu meaning ‘bay’ or ‘lagoon’), Durban is the largest city in the KwaZulu-Natal Province. It serves as the most important manufacturing hub of South Africa after Johannesburg and is the busiest port in South Africa as well as Africa.

Often left out when one thinks of a visit to South Africa’s main cities, Durban really is something to behold. You could say Durban mixes the business life of Johannesburg with the play of Cape Town, but with a touch of it’s own distinctive flavour. With its luxurious beaches and sub-tropical climate Durban is well known for it’s Ibiza-like night scene.

It was first inhabited by Zulu tribes (evidence in the Drakensberg Mountains place their location here from 100,000 BC) and is still to this day very much the capital of the ‘Zulu Kingdom’.

Portuguese explorer, Vasco da Gama, was the first European to discover KwaZulu-Natal when he sailed parallel to it’s coast at Christmastide in 1497, searching for a route from Europe to India. He named it ‘Natal’ (Christmas in Portuguese). In 1824, 25 men arrived from the Cape Colony to establish a settlement on the Northern shore of the Bay of Natal.

An adventurer named Henry Francis Fynn befriended the legendary Shaka Zulu when he helped the Zulu king recover from a stab wound he sustained during a battle. Shaka granted Fynn a ’30 mile strip of coast a hundred miles in depth’ as a token of gratitude. In a meeting of 35 European residents in Fynn’s territory on 23rd June 1835, d’Urban was established as a capital town named after Sir Benjamin d’Urban (then governor of the Cape Colony).

The Voortrekkers then established the Republic of Natalia in 1838 . Reports of mistreatment of the Zulu by the Voortrekkers reached the governor of the Cape Colony who dispatched a force to re-establish British rule in Port Natal which arrived on the 4th May 1842. The British built a fortification (later called The Old Fort) and attacked the Voortrekker camp at Congella, however they failed and their camp was put under siege.